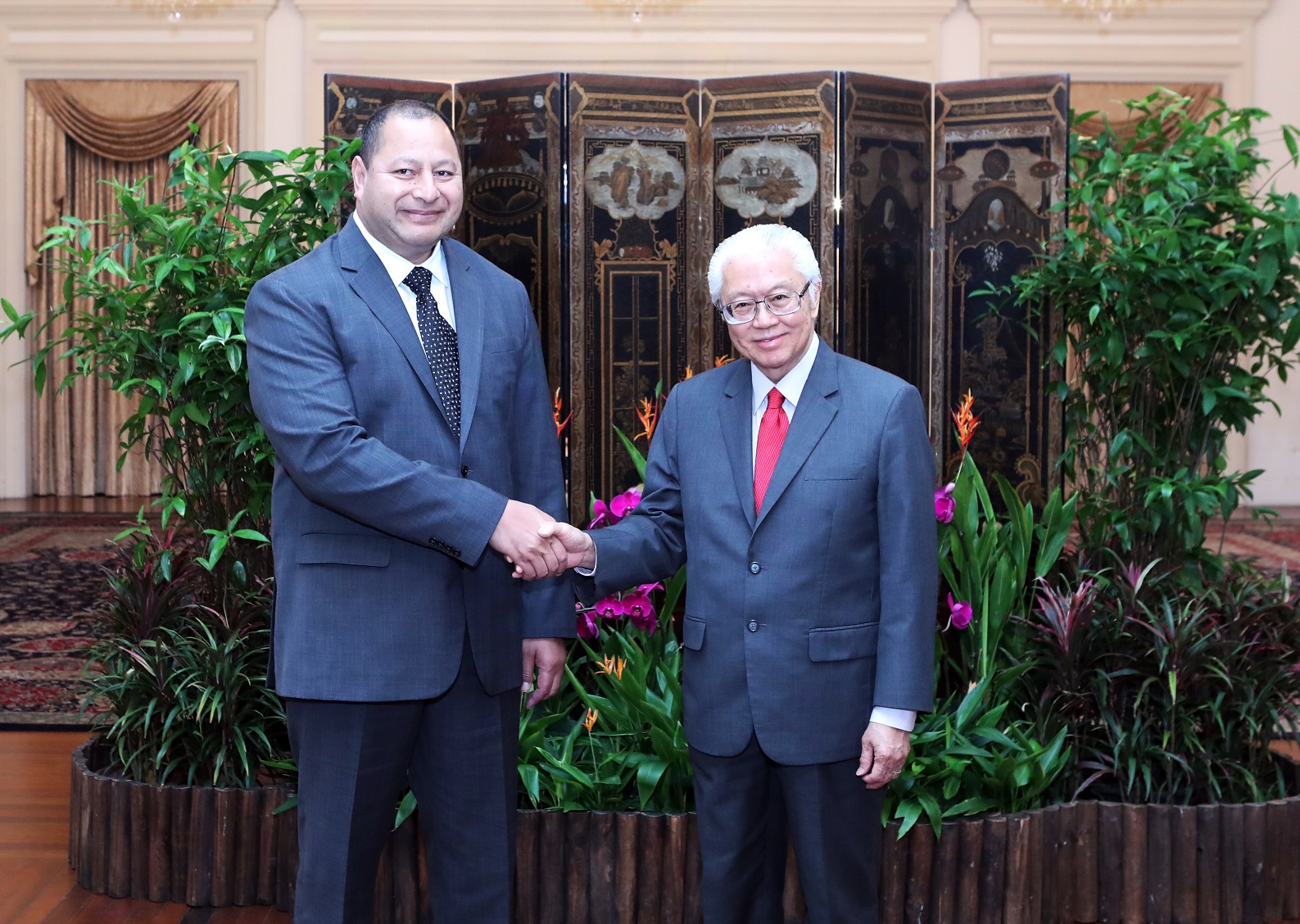 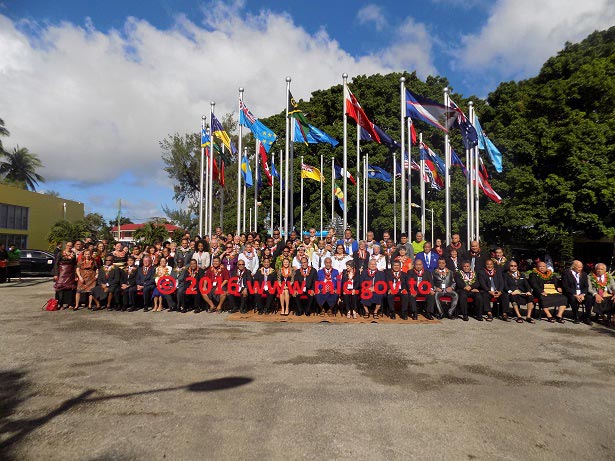 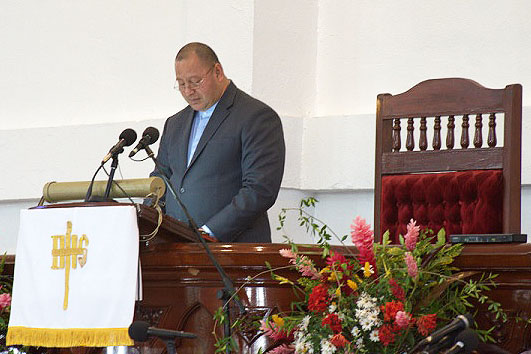 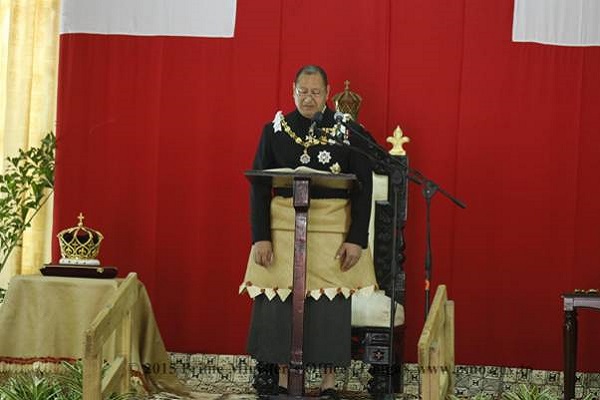 HM King Tupou VI will mark his 57th birthday on Monday 4th of July, a public holiday in Tonga.

Official birthday celebrations will include a Military Parade by His Majesty’s Armed Forces (HMAF) at Mala’e Pangai Lahi in central Nuku’alofa, to be followed by a Thanksgiving and Royal Luncheon at the Royal Palace grounds. 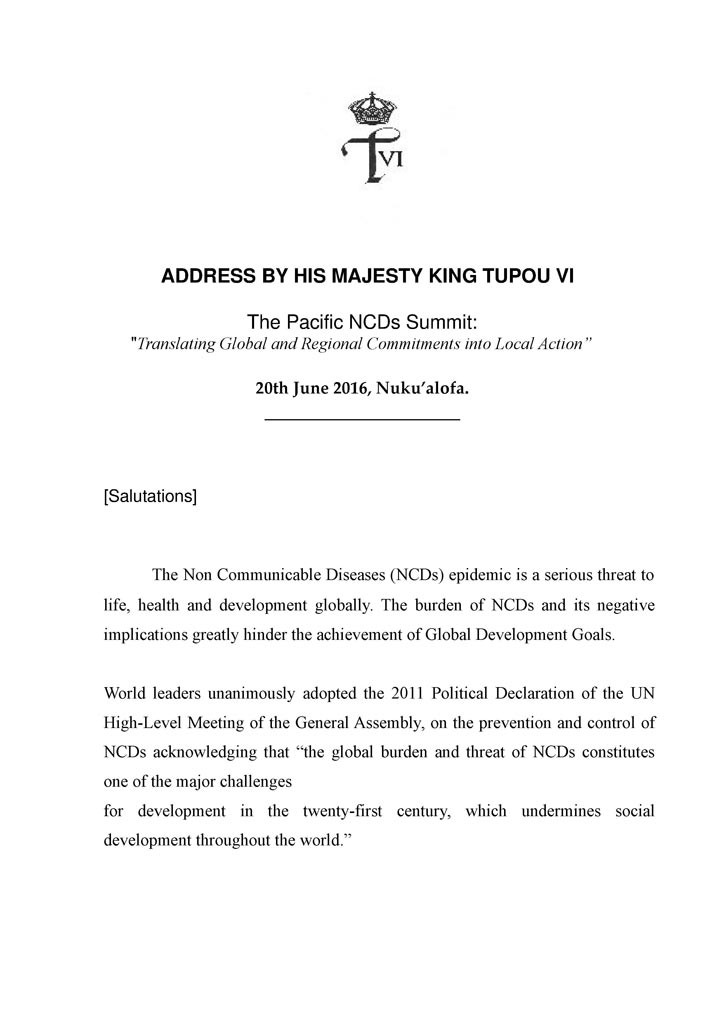 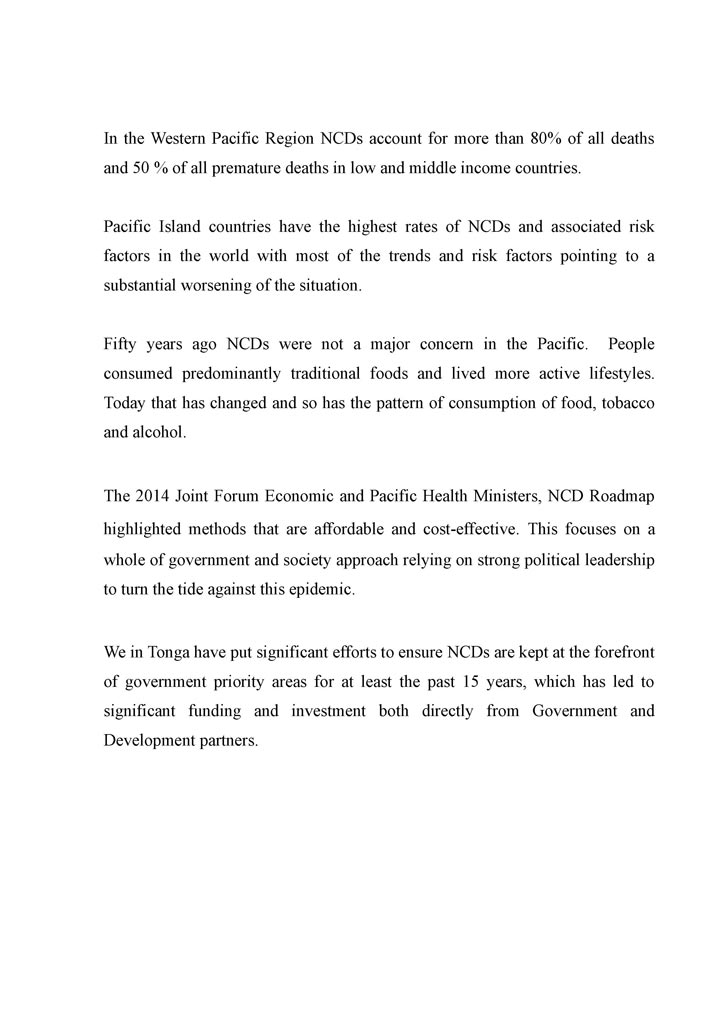 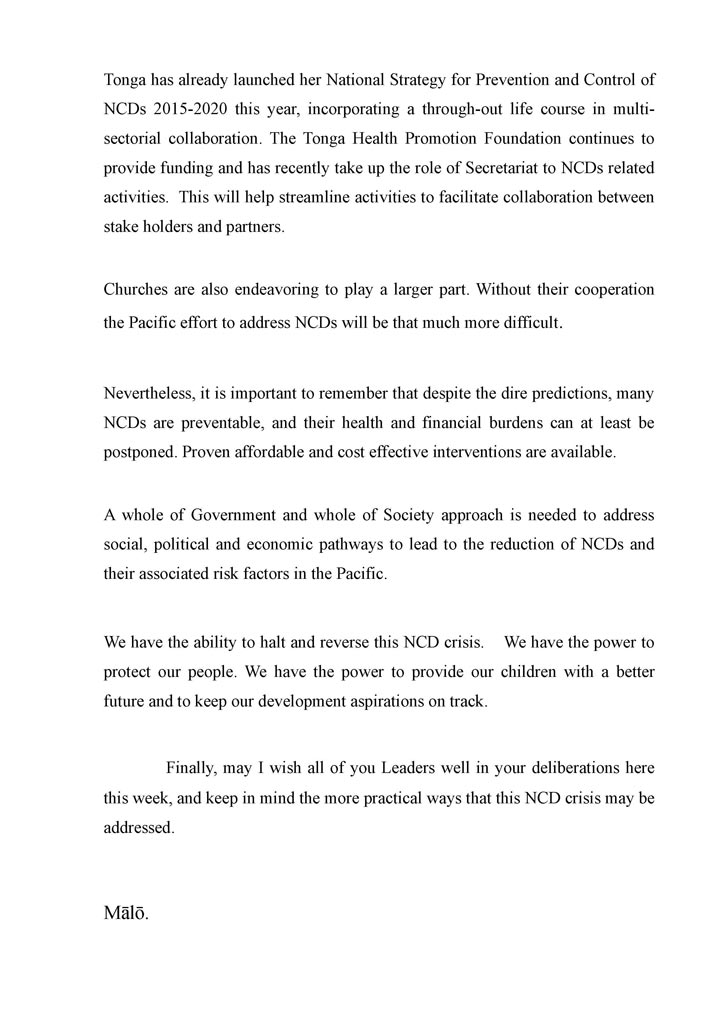 More than 120 high-level delegates from around the region and development partners in attendance including the President of Kiribati HE Taneti Maamau, UNDP Administrator Helen Clark and Director General of SPC Colin Tuikuitonga.

The theme of the summit is ‘Translating Global and Regional Commitments into Local Action’ aiming to address the need for more high level political leadership on NCDs and to identify ways forward in addressing the issue. In His Majesty’s opening address he told the delegates that Tonga has put significant efforts to ensure that NCDs are everyone’s agenda.

“Here in Tonga, I am pleased to state that we have put in significant efforts to ensure that NCDs is kept very much at the forefront of everyone’s agenda,” he said.

“NCDs have been specified as among the government’s priority areas for at least the past 15 years.”

He stated that the current Tonga Strategic Development Framework prioritize NCDs with the backing of strong government leadership.

“The current Tonga Strategic Development Framework continues to prioritize NCDs and government leadership and support continues to be strong.”

“This is reflected by ongoing legislative and policy measures passed through Parliament as recently as a few months ago to help address NCDs related issues such as affordability of unhealthy foods and tobacco products.”

“The Tonga Health Promotion Foundation continues to provide funding and has recently also taken up the role of Secretariat to NCDs related activities. This will help streamline activities and facilitate collaboration between the different stake holders and partners.”

“I am pleased to share that the churches are also endeavoring to play their part. Many church leaders have shown strong leadership in making often unpopular decisions related to food given it’s an integral part of Tongan social and ceremonial events.”

UNDP Administrator Helen Clark said according to the World Health Organization forty percent of Pacific Islanders have been diagnosed with NCD.

“Forty percent of Pacific Islanders have been diagnosed with an NCD according to WHO in 2010, many before they have reached their fortieth birthday,” she said.

Clark said the support from partners was critical to help governments to prevent and control NCDs.

“Support from partners can be catalytic, and can supplement the capacity of governments themselves to commit domestic resources to NCD prevention and control.”

“Tonga, our host legislated for a Health Promotion Foundation Act nearly a decade ago.”

Director of South Pacific Community Colin Tukuitonga said the Pacific is often referred to as the NCD capital of the world.

“You are all well-aware that the Pacific is often referred as the NCD capital of the world and that we are facing an NCD crisis,” he said.

“We have among the highest prevalence of NCDs and NCD risk factors in the world and feature prominently on a number of ‘Top 10’ lists that we would rather not be on.

“At the end of the day, regardless of what challenges we may be facing as Pacific Islanders, the fact is between six and eight of every 10 deaths in the Pacific is from NCDs.”

The Summit will end on Wednesday and the sessions are run by different key delegates from the Pacific nations.

The event is jointly organized by the Government of Tonga and the Pacific Community (SPC) with support from the Australian Government, New Zealand Aid Programme, Government of the United States, World Bank, World Diabetes Foundation (WDF), World Health Organization (WHO) and the United Nations Development Programme (UNDP).

In his address at the Centenary Church, Saione, HM highlighted the significance of both the Free Wesleyan Church 93rd annual conference and Tupou College’s 150th Anniversary, where education and christianity were both accepted by the Late King George Tupou I.

A special public holiday was held on 22 June in Tonga to commemorate Tupou College's 150th Anniversary.

Her Majesty Queen Elizabeth II will present a Queen’s Young Leaders Award to an exceptional young person from Tonga at a ceremony at Buckingham Palace, London on Thursday 23rd June.

As the Commonwealth celebrates The Queen’s 90th birthday, this year’s Award winner, Aiona Prescott, aged 21, has been recognised by Queen Elizabeth II for taking the lead in transforming the lives of others and making a lasting difference in her community. As a Queen’s Young Leader, she will be representing Tonga as she joins winners from 45 different Commonwealth countries in London for five days of high-level engagements, all designed to help them further their life-changing work.

Before receiving their Queen’s Young Leaders Award at Buckingham Palace, the winners will visit 10 Downing Street and the UK headquarters of global social networking company Twitter, and meet with senior executives at the BBC World Service. They will also meet the Commonwealth Secretary General, take part in workshops at the University of Cambridge, have meetings with UK business leaders, and visit projects that are changing the lives of vulnerable people in the UK.

Aiona Prescott is being recognised for her work with young people tackling issues such as teenage pregnancy, early school leavers and gender-based violence. Selected from a competitive process where thousands of young people from all over the Commonwealth applied to be a Queen’s Young Leader, Aiona said: "I’m looking forward to meeting all the Queens Young Leaders from around the world who are doing life changing things in their communities, to learn from them and to give back in whatever way I can."

This year’s Award winners are working to support others, raise awareness and inspire change on a variety of issues including education, climate change, gender, mental health and improving the lives of people with disabilities.

The application process to become a 2017 Queen’s Young Leader opens at 8.00pm BST on Friday 24 June 2016. The programme is looking for people aged between 18 and 29 who are dedicated to creating positive changes to the lives of people in Tonga.

Details about how to apply to become a Queen’s Young Leader, together with information about the 2016 Award winners and Highly Commended runners up, is available at www.queensyoungleaders.com. 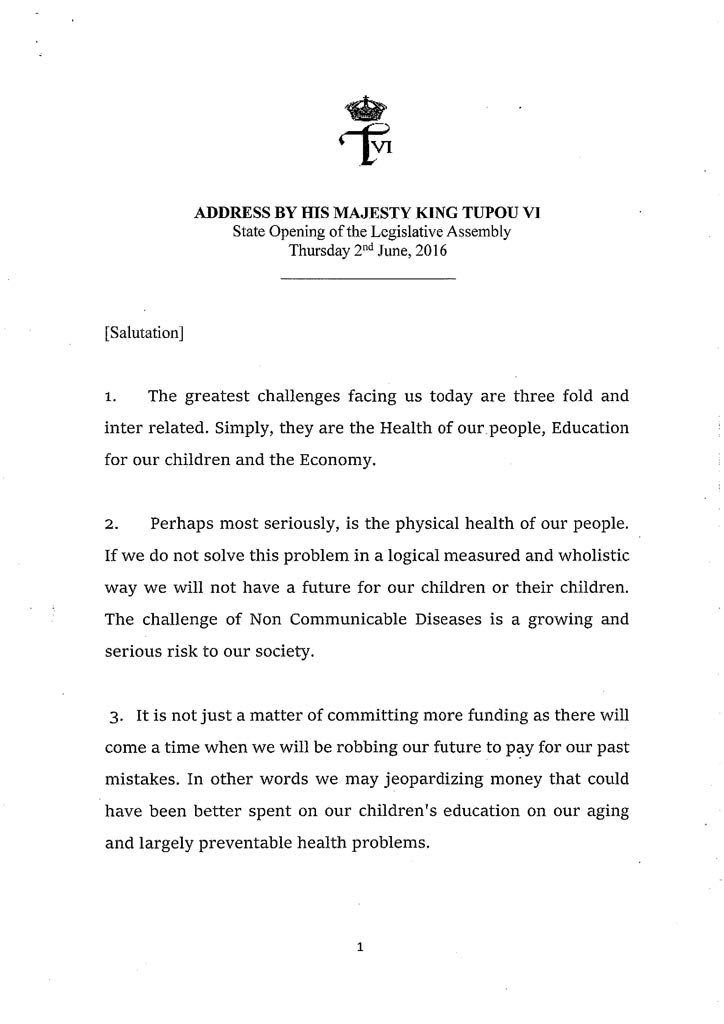 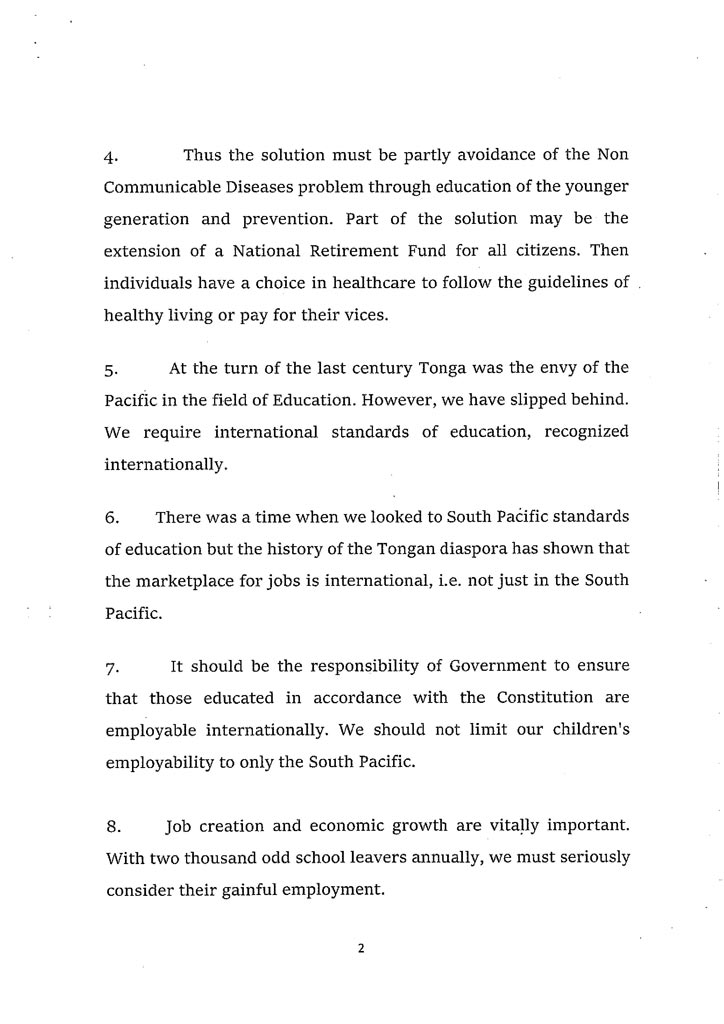 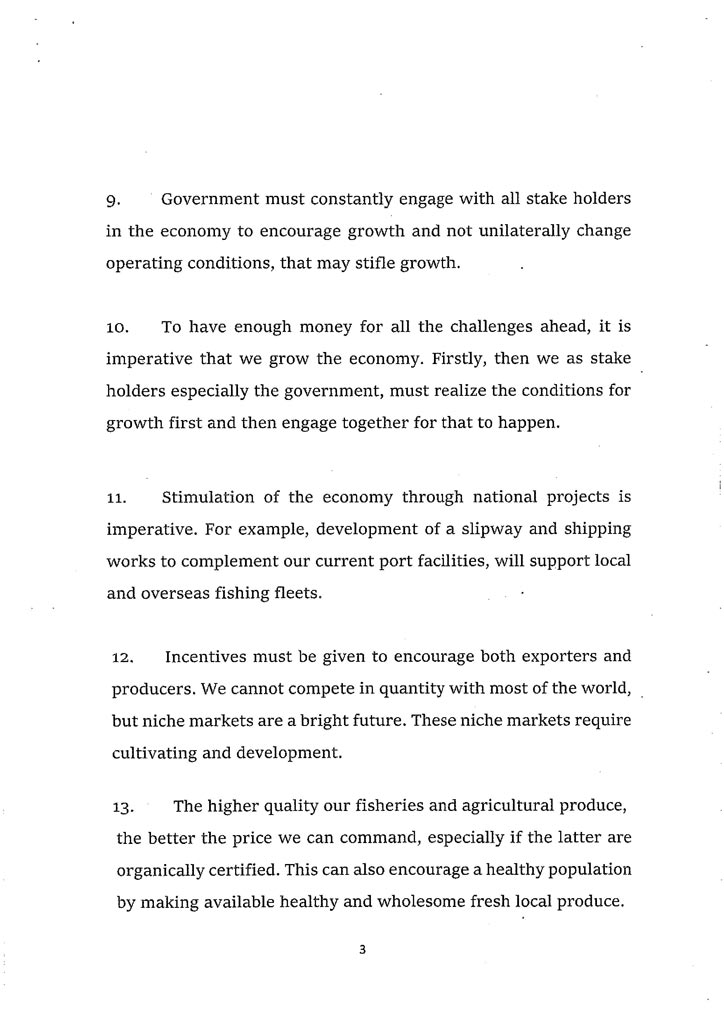 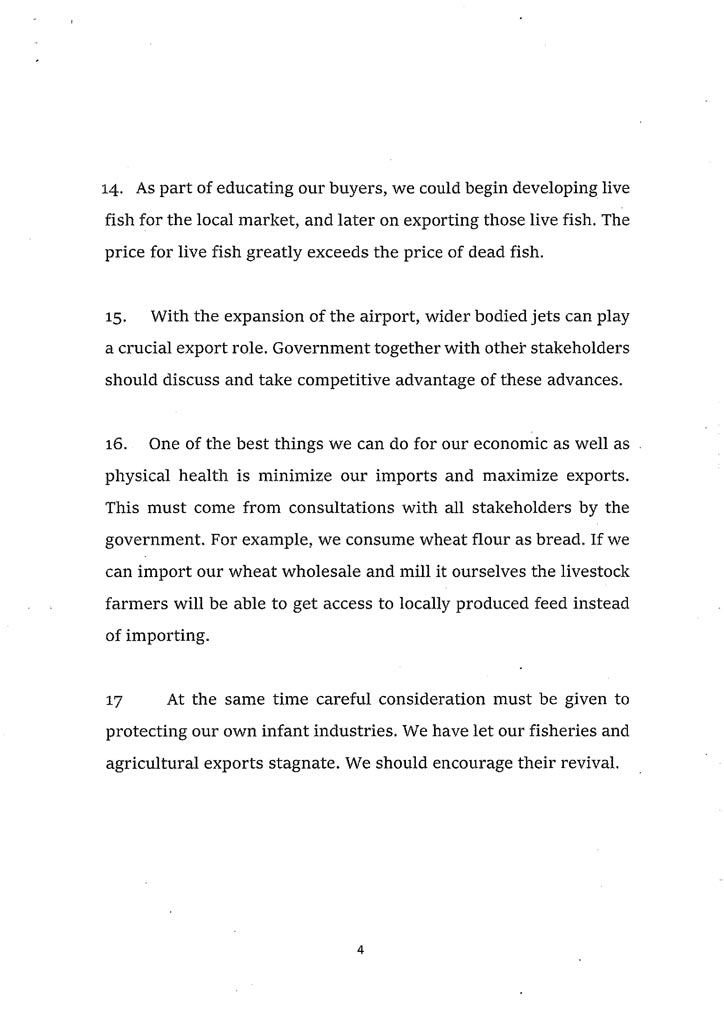 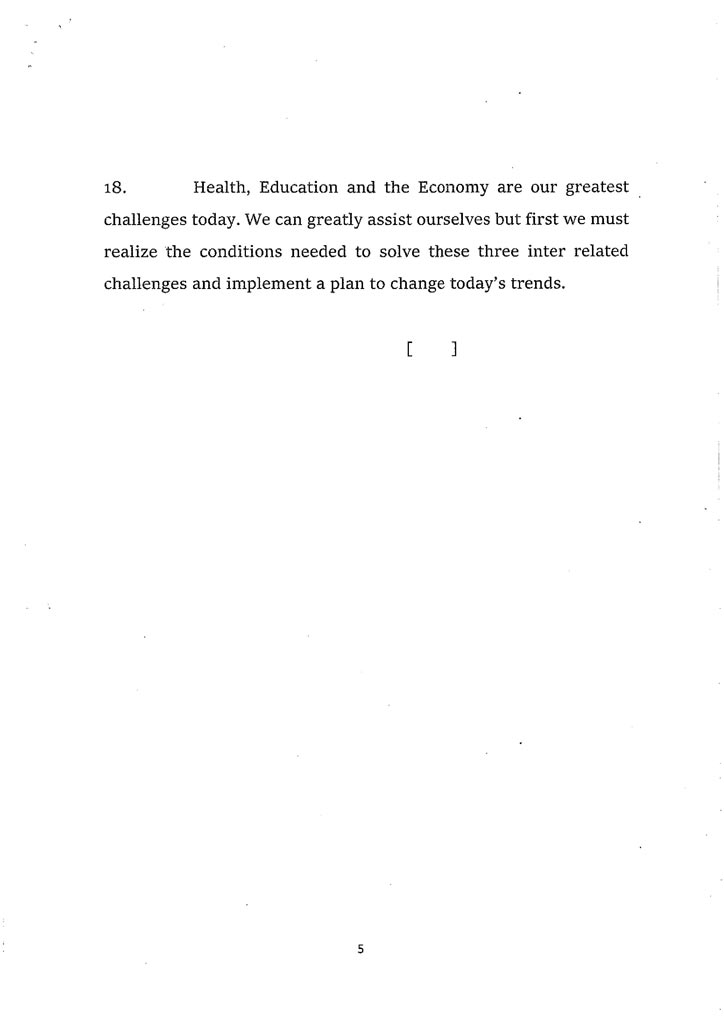 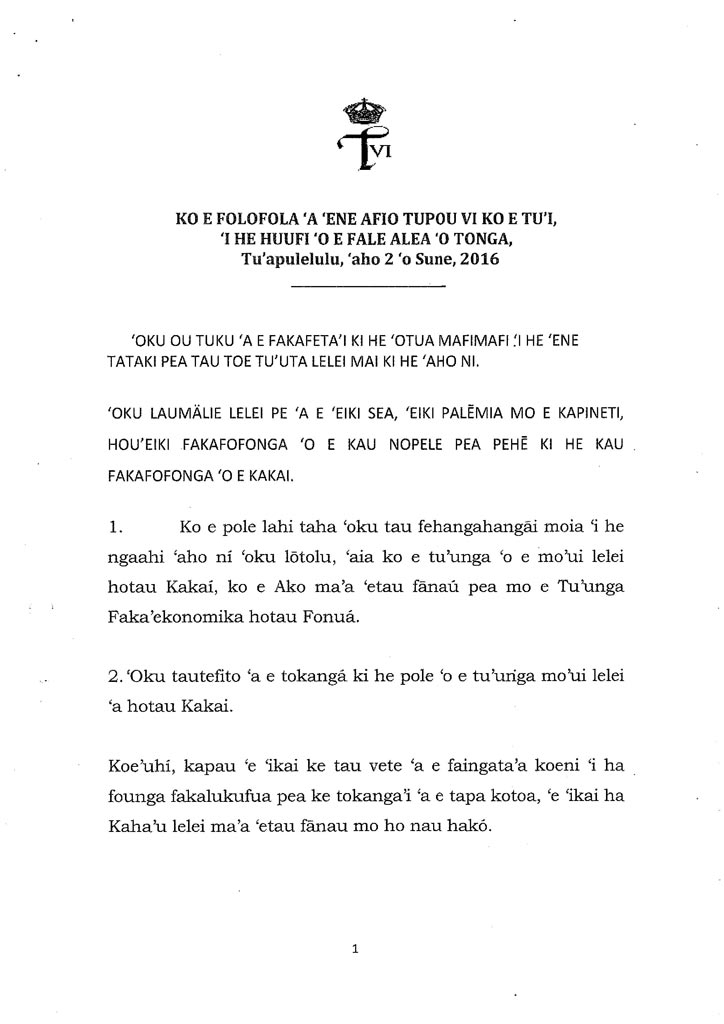 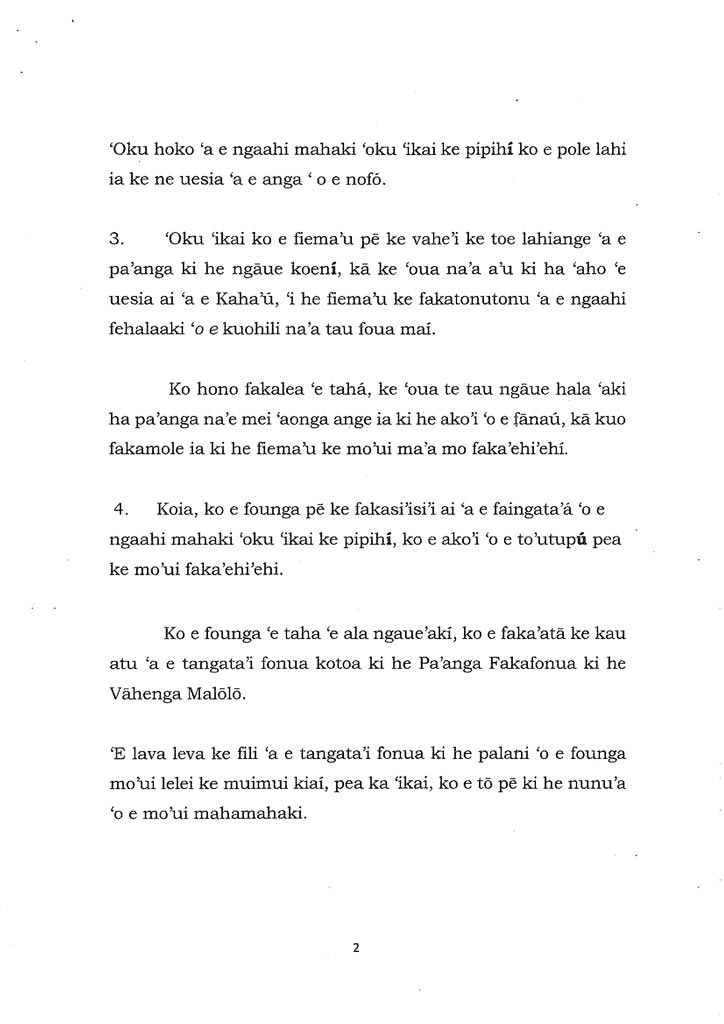 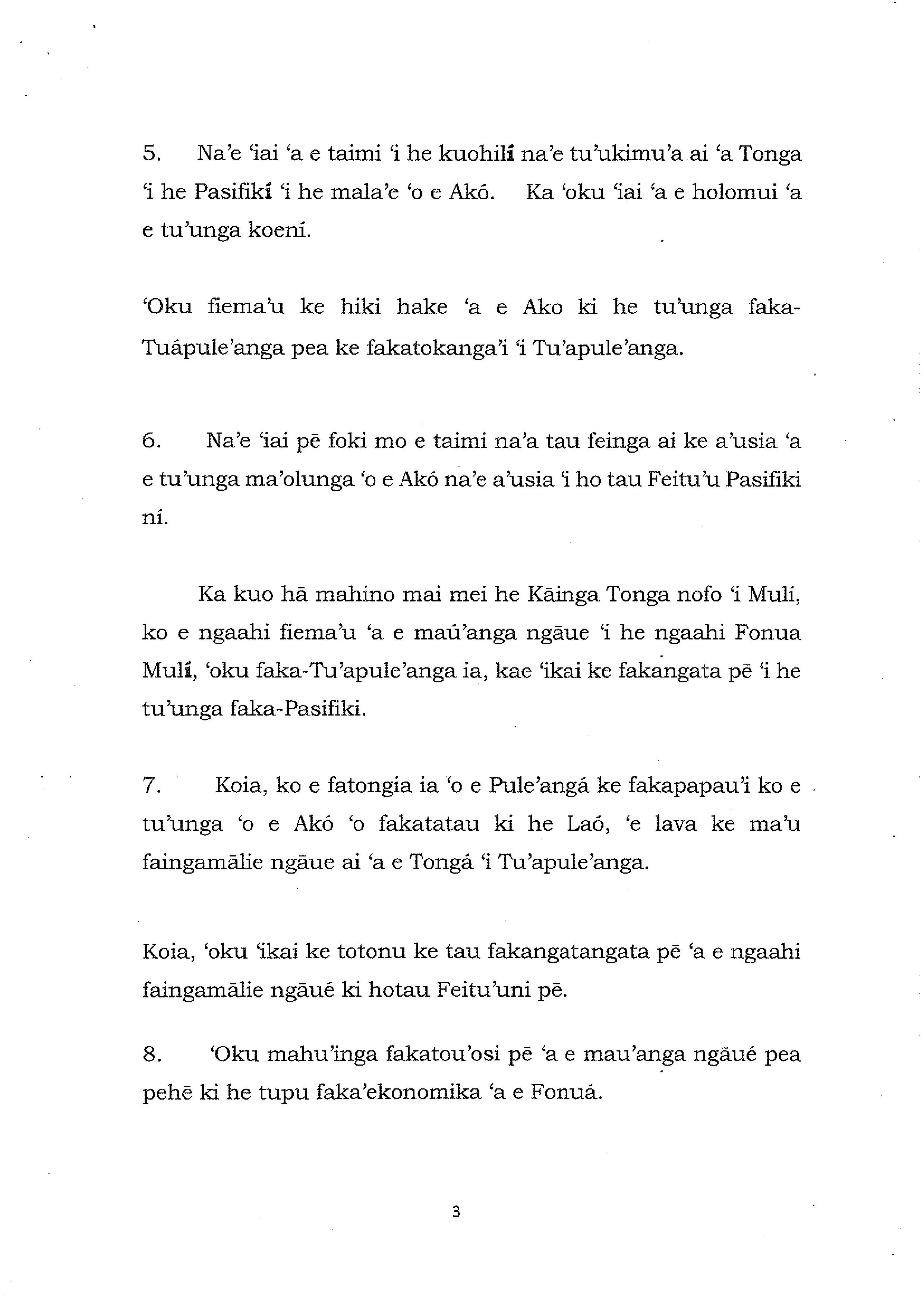 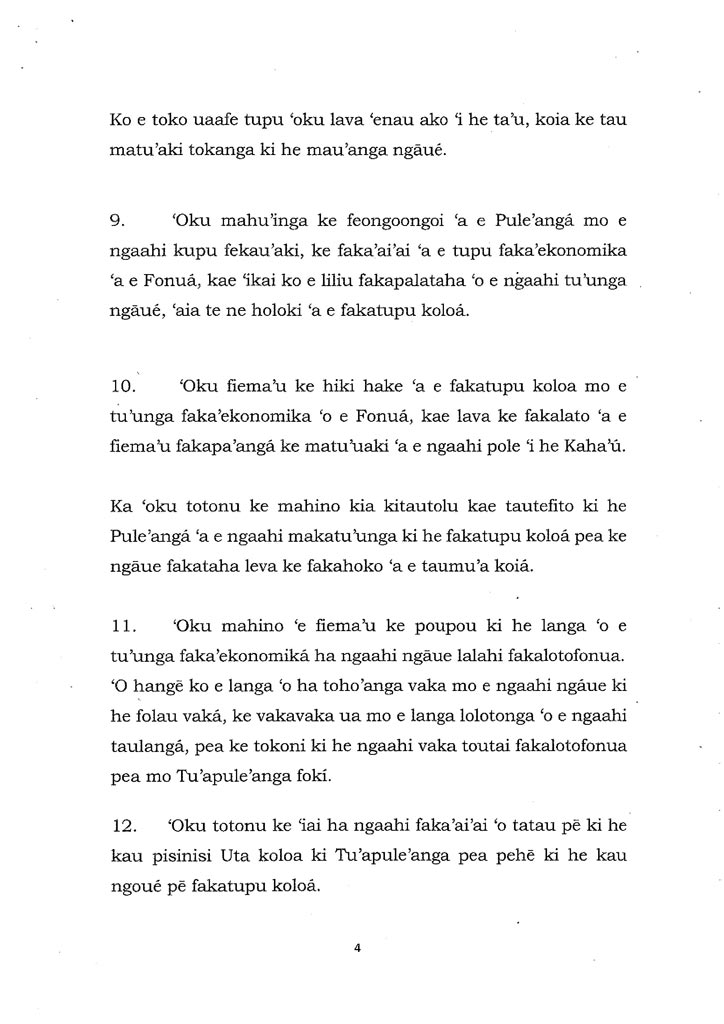 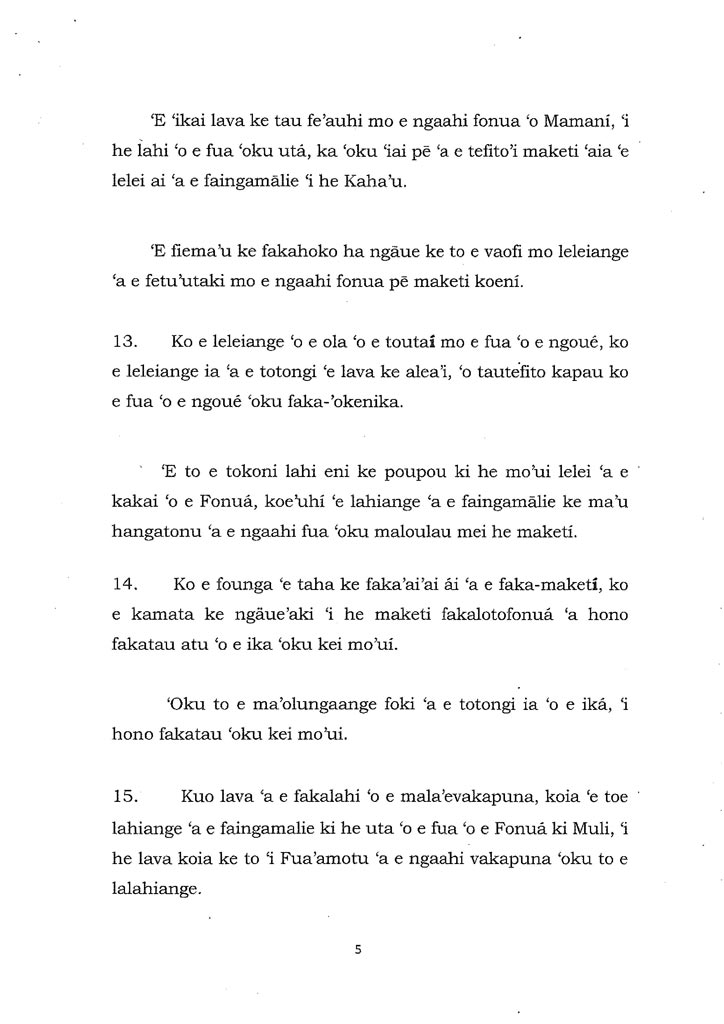 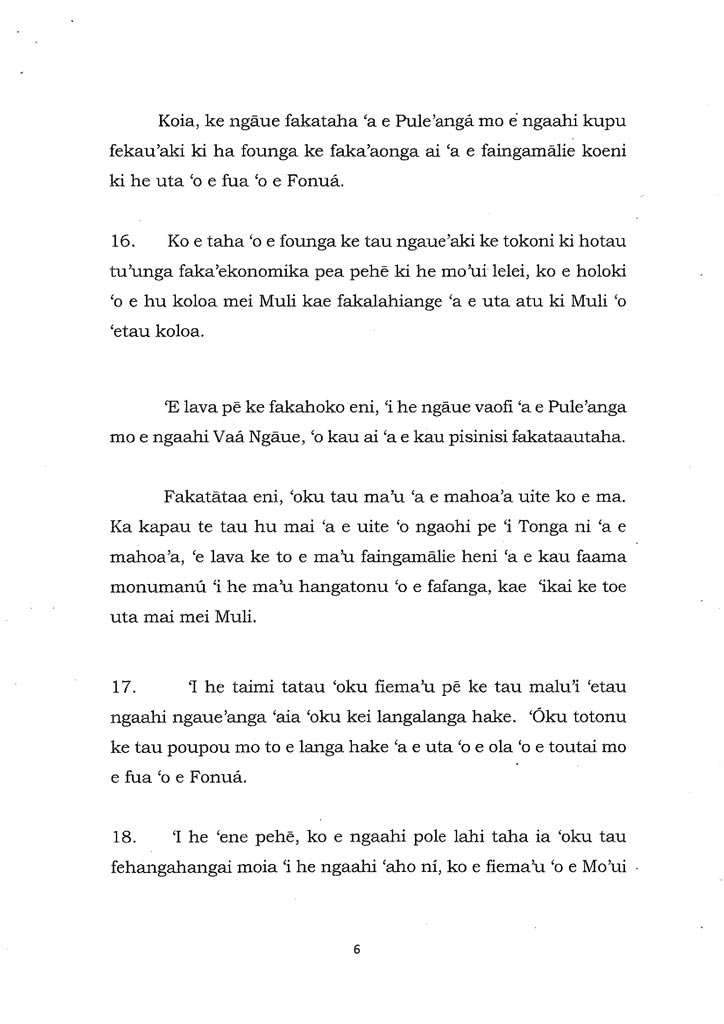 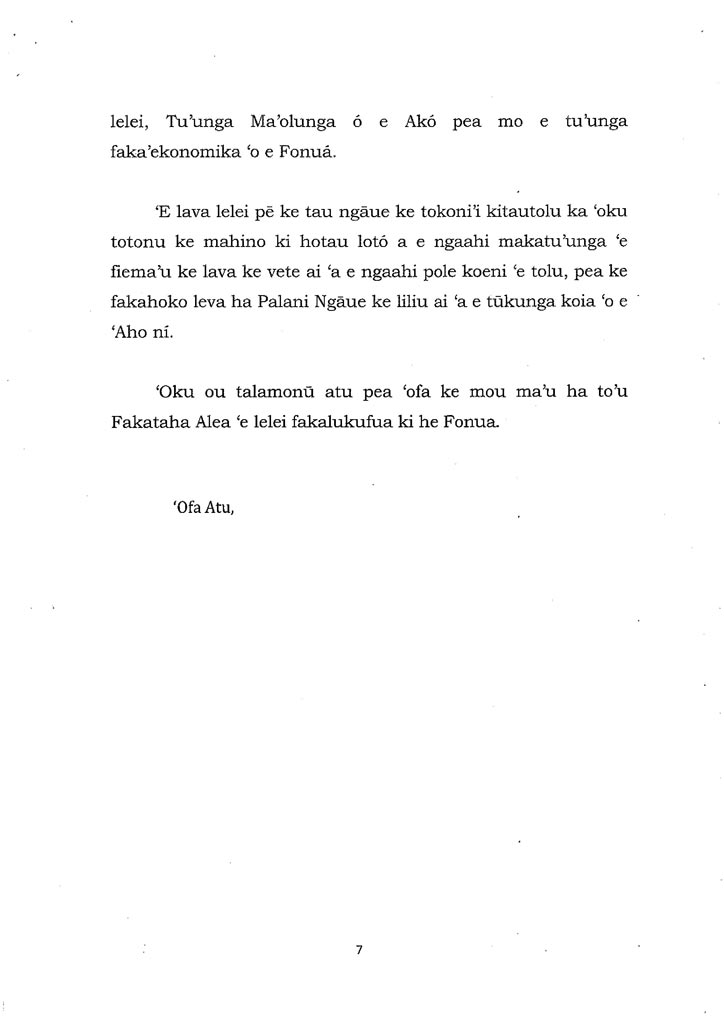 HM Tupou VI's Speech at the Throne Opening of Parliament 2015

Lord Speaker. I give thanks to the Almighty that you are well as are the Prime Minister, Their Lordships and Ministers of the Cabinet , the Lord Peers and Members of the Parliament.

It is important for Parliament that government has an important working agenda, to implement good governance, eliminate poverty, and to address social issues such as healthy living and raising the standard of education, and technical innovation.

It is important for the country to be well preparing of natural disasters, challenges we face with climate change and to encourage move toward renewable energy.

There are major projects to be addressed such as improving the standard of our transportation and communication services, and to prepare the country to host the 2019 Pacific Games.

Lord Speaker, it is important for government to pay special attention to the important sectors that are most relevant to the economic livelihood of the people such as agriculture, fisheries and tourism.

We extend our gratitude to the Governments of Commonwealth of Australia, the Government of New Zealand, the People’s Republic of China, Japan, the for their generous assistance to our country in the past year. We are also grateful to the help which we have received from the European Union and the World Bank for their invaluable help.

As we prepare for the coronation and I want to acknowledge all the efforts have done by the government and country towards it.

I send you all my Greetings and best wishes for this year’s parliamentary term.

Official Announcement of His Majesty’s Coronation

The Hon Prime Minister, Samuela ‘Akilisi Pohiva, officially announced to the public on Monday 27th April 2015 the celebration of events for His Majesty’s, King Tupou VI, coronation 2015. The programme for the events are as follow:

Issued by: The Prime Minister's Office

His Majesty King Tupou VI met with Singapore President Tony Tan Keng Yam at the presidential residence Istana on 8 September 2016. King Tupou VI and President Tan reaffirmed the warm relations between Singapore and Tonga and discussed developments in Tonga and the global economy.

During the working visit to Singapore, His Majesty has received calls by Singapore Senior Minister of State, Ministry of the Environment and Water Resources and Ministry of Health Dr Amy Khor and Parliamentary Secretary, Ministry of Education and Ministry of Social and Family Development Dr Muhammad Faishal Ibrahim.

On September 5th, His Majesty and Her Majesty Queen Nanasipau’u was hosted to lunch by Singapore's Senior Minister of State, Prime Minister’s Office, Ministry of Foreign Affairs and Ministry of Transport Mrs Josephine Teo.

His Majesty was presented with briefings on Singapore’s education and healthcare systems, as well as Singapore’s experience in heritage preservation, tourism development and port management. 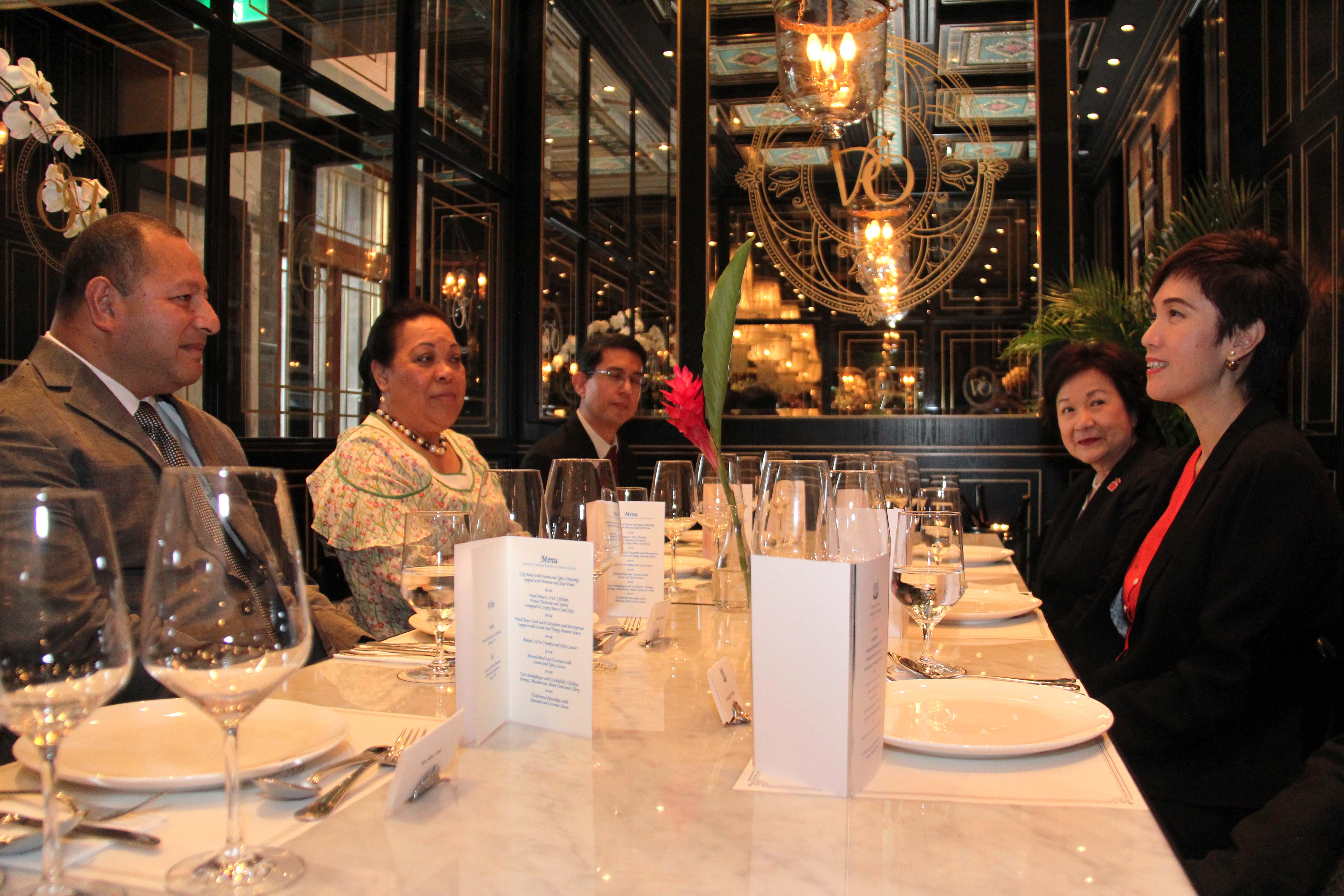 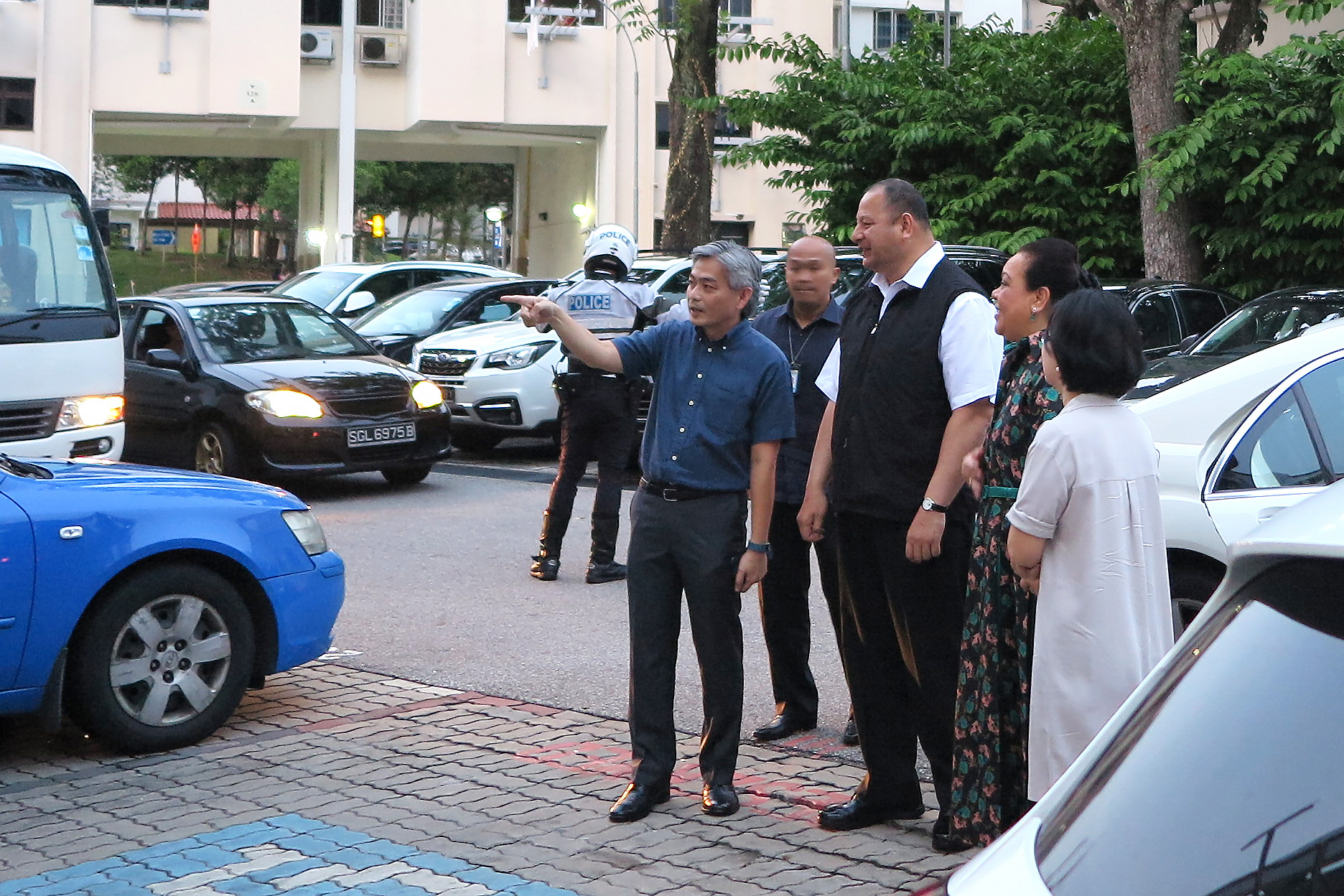 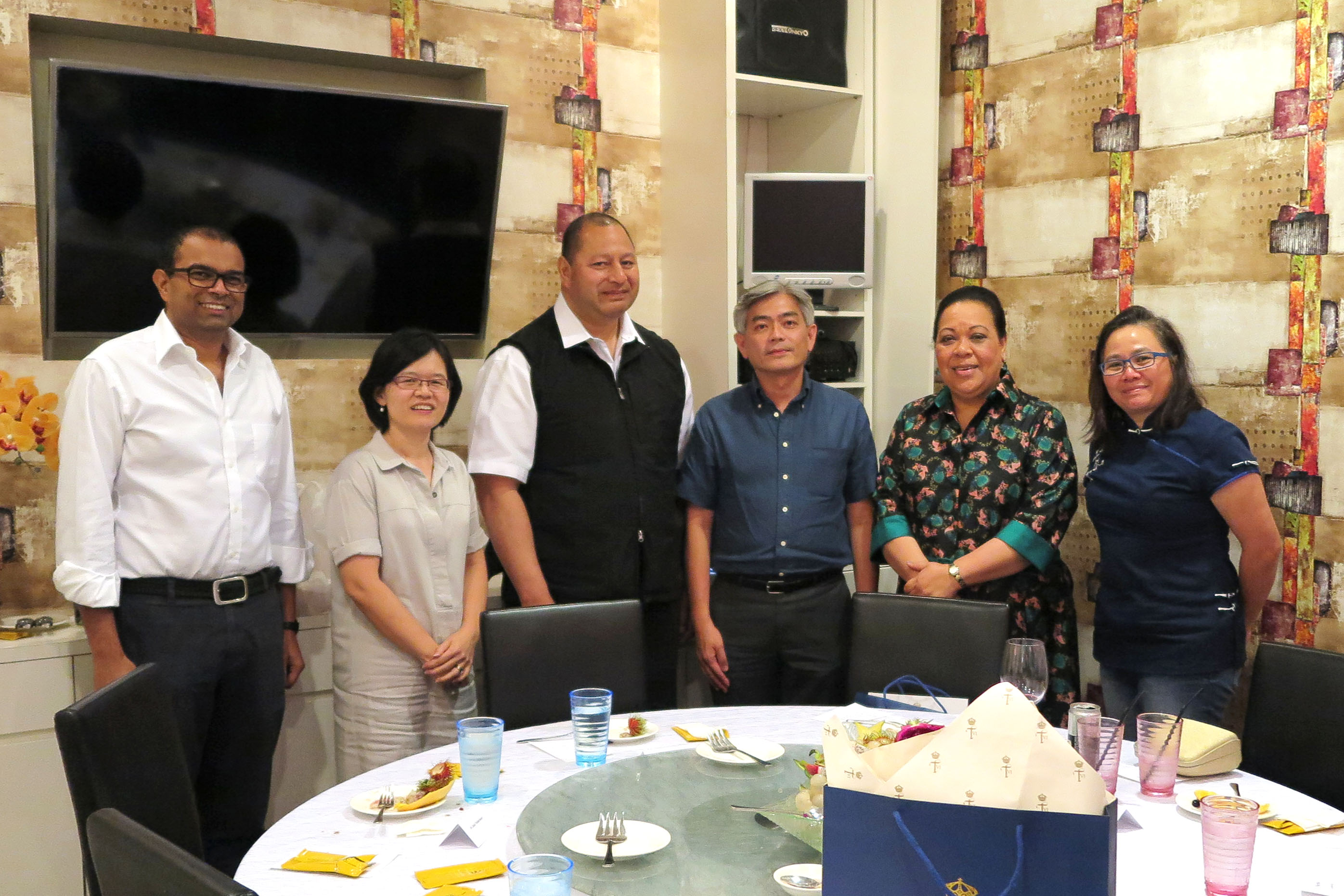